In a July weblog entry, I reported on a rather important YouGov poll. YouGov.com and Anthony Wells were so kind to provide the underlying poll data. Earlier I estimated some rankings, but thanks to this kindness we now have certainty about the poll data, so that only the uncertainty remains due to polling itself. It also appeared that what I had categorized as a hard (H) Brexit better be rephrased as the No Deal (N) case. I will maintain the label on the Tariff (T) option, that some would call hard.

The UK general election was on June 8 and the poll was taken on June 12-13 so that the persons polled will have had vivid recollections. For this reason, these polling data can be considered quite important.

The poll generated data about confusions in the British electorate. It is useful to belabour the point, for Brexit is a key event and would have quite some impact for the coming decades. I would respect the UK decision to leave the EU but have my doubts when it is not based upon Proportional Representation (PR). A referendum gives proportions but referenda tend to be silly and dangerous, as they are an instrument of populism rather than of representative democracy. Indeed, it appears that the Brexit referendum question was flawed in design. The YouGov poll helps us to observe how confused a major section of the UK electorate is. Let us dig a bit deeper.

The following copies my weblog text of July 11, but now replacing the estimate by the real data.

Representation of preferences via a ranking matrix

The YouGov poll presents the data in a ranking matrix, with the first preferences in the first row, then the second preferences, and so on. For the Brexit referendum outcome of 48% Remain and 52% Leave, for example, we might have the following setup. It is a guess, since the particular ways of Leaving were not included in the referendum question (and neither for Remaining). This example however is the result that you would expect if Remainers and Leavers would have the mentioned consistent orderings. 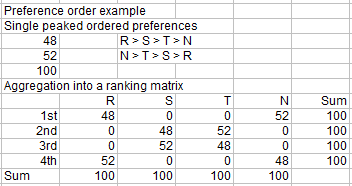 Observe that each voting weight (take e.g. 48) for a preference order list is put in precisely one place per row and per column, i.e. that it doesn’t occur more times in a single row or column. This explains why the border sums add up to 100.

The YouGov data, that I have been referring to, contain the results of a poll of 1651 adults in Great Britain, i.e. the UK excluding Northern Ireland. From page 13-16 we can collect these data for the whole of Great Britain for 2017. YouGov states that the sample has been weighted for social-economic and political indicators. It is not clear to me how the “Don’t know”s are being handled for this particular issue. See also this discussion by Anthony Wells.

Using techniques of apportionment we estimated the number of people per cell in the poll. However, we now have the actual data (rounded to one digit from multi-digit percentages times 1651):

Some of these 24 possibilities will be rather curious. It is not clear what to think about R  > N > S > T  for example (Case 5 below). This would be a Remainer who would rather prefer No Deal to the EEA or some agreement not to have a trade war on tariffs. A tentative explanation is that this voter has a somewhat binary position, as Remain versus No Deal At All, while the other options are neglected. 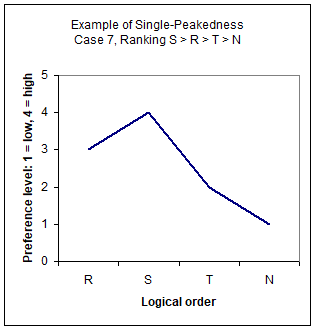 Voting theory has a core that assumes that voters are both autonomous and rational, so that any preference would have some logic. The logical order R, S, T and N might seem arbitrary to some voters who may think otherwise. We do not impose that order but invite voters who think otherwise to explain why they choose a different order. Potentially each voter has his or her own criteria so that the best is on top, and all other options follow in proper order. Voters with multiple peaks in their preferences would have more to explain to us to understand them than voters with a single peak. Without a good explanation, we cannot reject the possibility that there is some confusion.

Presentation of preferences via preference orderings

The following are the YouGov data for the preferences orderings that underlie above YouGov results on percentages. See the excel sheet in the Appendix. This table shows only the percentages and not the numbers of people in the poll (that add up to above table), since the percentages are the main finding. Single dots are zero’s. The ConR / L and LabR / L subdivisions concern the voters in the poll who voted R or L in the 2016 Brexit referendum and who voted Con or Lab in 2017. They form only a part of the sample, so their sum doesn’t add up to the total on the left. 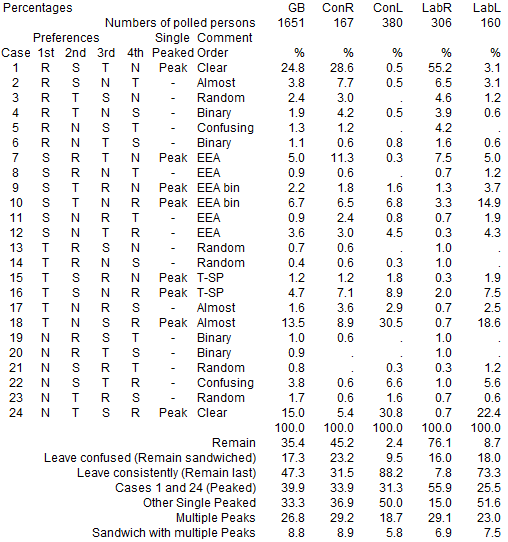 Above results for GB can be split up in on the peaks and sandwich. The combinations give the following percentages:

The 8.8% would be a relevant section of the vote. They all voted Leave, but divided on S, T and N. Potentially the outcome of the 2016 Brexit referendum has been decided by the 8.8% GB voters who have Remain neither in the first or last position, and who do not follow the standard logical order on the options.

The division of ConR / L and LabR / L is losing its relevance because it are dwingling groups, they are changing loyalties, and their 2016 votes are becoming history while there are new issues. Yet, the 2016 referendum question was flawed, and it is relevant to see how sizeable parts of the UK electorate deal with the logical conundrum that they took part in.

The excel workbook with the full YouGov data and the earlier estimate is: 2017-09-18-YouGov-Rankings-full-data