Wikipedia (a portal and no source) gives an overview of the Dutch general elections of March 15 2017. For the interpretation of the vote, there is this paper: “The performance of four possible rules for selecting the Prime Minister after the Dutch Parliamentary elections of March 2017“.

The abstract of the paper is:

“Economic policy depends not only on national elections but also on coalition bargaining strategies. In coalition government, minority parties bargain on policy and form a majority coalition, and select a Prime Minister from their mids. In Holland the latter is done conventionally with Plurality, so that the largest party provides the chair of the cabinet. Alternative methods are Condorcet, Borda or Borda Fixed Point. Since the role of the Prime Minister is to be above all parties, to represent the nation and to be there for all citizens, it would enhance democracy and likely be optimal if the potential Prime Minister is selected from all parties and at the start of the bargaining process. The performance of the four selection rules is evaluated using the results of the 2017 Dutch Parliamentary elections. Plurality gives VVD. VVD is almost a Condorcet winner except for a tie with 50Plus. Borda and BordaFP give CU as the prime minister. The impossibility theorem by Kenneth Arrow (Nobel memorial prize in economics 1972) finds a crucially different interpretation.” (Paper)

The paper uses the estimate of March 16, and the official allocation of seats presented on March 21 was the same. Here is a letter (in Dutch) to the Speaker of the House with these results and a summary statement.

Relevance for the world

In addition to that paper, let me mention some other points.

Some additional findings on turnout

The official results of March 21 2017 allow an additional statement on turnout. The key data are in the following table.

The Dutch House of Commons has 150 seats. With the turnout of 81.9% actually only 120 seats were fully taken. 27 Seats were lost to no-shows, 2 seats were lost to the dispersion of small parties and 1 seat was lost on blank or invalid votes. One might argue that 30 seats should remain unused, so that the parties that were elected in the House would find it tougher to create a coalition of 76 seats or 50%+1. Alternatively, when the 30 seats are still allocated to the elected parties, then one might raise the majority criterion to 94 seats. Instead, however, the elected parties take the 30 seats anyway and still apply the 76 seats majority rule. See this paper for a discussion w.r.t. an earlier election.

The vote took place while there was a clash between Holland and Turkey – see the scene on Haberturk TV reported on by Euronews. Much has been said about this elsewhere, but here we continue testing the quality of Google Translate: “They protested the Netherlands by squeezing oranges”.

The Turks should however beware that the House of Orange claims Russia, and you wouldn’t want an orange bear on your doorsteps.

Some Dutch had been prepared for this

In the months before, visionary artist Inez Lenders had already created the artistic reply to maltreatment of oranges. In the match on creativity, the score is 1 – 1.

The Dutch Official News with a false suggestion

The site Joop.nl calculated that the elections generated 5 MP’s with Turkish roots and 8 MP’s with Moroccan roots, and 0 with roots in Suriname. We may include one Turkish-Kurdish MP, so a total of 14 or 9.3% of relatively new immigrants. There are 4 German names, 2 French and 1 Jewish. Thus a total of 21 MP’s or 14% immigrant names.

Notwithstanding such a composition in the new House of Commons, president Tayyip Erdogan fulminated about descendents of nazi’s, though he is right that the Dutch record in World War II is not so good.

When Angela Merkel and other Europeans supported Dutch premier Mark Rutte, then Erdogan presented a statement for which it is important to provide the right translation. Reuters seems to be okay:

This is a fairly decent warning. The age of European imperialism till 1945 is over. In the world population the European share is dwindling. If the world wants to maintain the idea of safe international travel then we need rules and regulations and consistent implementation.

I have informed NPO Ombudsman Margo Smit about the difference between warning and threatening, but they haven’t changed it yet. 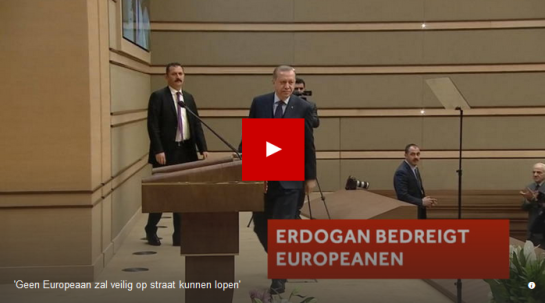 Official Dutch television NOS falsely states that president Erdogan issues a threat that no European in any part of the world can safely walk on the street. In truth he only warns.