Geert Wilders used a tweet with a photoshopped picture of Alexander Pechtold. The picture displays Pechtold as demonstrating for the introduction of Sharia in Holland. The political message is that Pechtold would be a fellow-traveller and part of the 5th column for political islam, intending to destroy freedom and democracy. Normally Wilders merely says this but a picture tells more than a thousand words.

This falsely portraying of a political opponent is a new low in the Low Countries.

The photoshopped picture would exist since 2009 but there are general elections for the Dutch House of Commons on March 15 which may be the reason why Wilders uses it now. Wilders might have limited campaign funds and the abuse of this picture is politically cunning, since hords of people, including me, are discussing it now. Attention is half of the job, and Wilders knows how to get attention. And when there is a terrorist attack, then he can claim that he has been warning all along.

Yet, the downside of this is, that there are feeble minds on the radical right, like Anders Breivik, who worship Wilders, and who might take this portrayal as an invitation to target Pechtold. The UK saw the assassination of Jo Cox in 2016. Holland already saw a smear campaign against Pim Fortuyn in 2002 who then got assassinated by an activist on the left. Yet a gunman in 2011 who killed six people was a sympathiser of Wilders. Journalist Peter Breedveld has been reporting consistently that the political climate in Holland is getting heated, repressive and threatening of violence. Pechtold is alarmed. He warned that Wilders is deliberately rousing up his followers. One sympathiser of Wilders already threatened Pechtold to kill him, and Pechtold informed reporters that he had to testify in court to get the man convicted. A close political friend of Pechtold, Els Borst, has been murdered by a lunatic in 2014, apparently without political motivation, but it still has an impact.

Wilders and Pechtold have a history of feeding on each other

Geert Wilders and Alexander Pechtold have a history of feeding on each other. They are each other’s best enemies. While Wilders finds great profit in demonising Pechtold as the fellow-traveller of political islam, Pechtold finds great profit in portraying Wilders as indecent and “over the top”. Their political clash was the motor for their rise to public attention in 2006-2010. In the elections of 2010, Pechtold jumped from 3 to 10 seats, and Wilders from 9 to 24 seats.

The following graph shows the number of seats of Wilders (PVV, red) and Pechtold (D66, blue) in the Dutch House of Commons, with a total of 150 seats. (Source: Wikipedia, here adapted.) 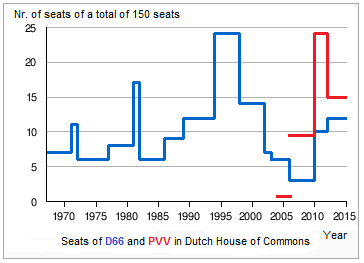 There is a major problem with D66

The major problem with D66 is that its party elite and its voters cannot think straight. The name D66 is an abbreviation of “Democrats 1966”, and the idea of founder Hans van Mierlo (1931-2010) was to improve democracy. Van Mierlo was from the Catholic south of Holland, and he was inspired by JFK in the USA. (See my weblog text on the Dutch Taliban.) Thus he suggested that Holland copied democratic conventions from the USA, like district voting, direct elected president and mayors, and referenda. Unfortunately, Van Mierlo had a degree in law and worked as a journalist, and he never really studied democracy. The membership of D66 are mostly lawyers too. They are mostly concerned about the “rule of law”, and less about what the law is about. By now, it should be obvious that Van Mierlo’s ideas about democracy have always been perverse, and actually reduce democracy. Yet, D66 doesn’t openly say so, and they still claim that they and their proposals would improve democracy. Thus D66 is a fossilised lie about democracy.

See my book Voting theory for democracy and this article about multiple seats elections.

Thus, when D66 collapsed to 3 seats, I hoped that D66 would be abolished, and that there would be room for a new political initiative, to combine sound ideas about democracy with sound ideas about economics and sound ideas about social compassion. Yet, there was Pechtold. He has a degree in art history and a working background as auctioneer, and developed further as a career politician. D66 apparently allows it, and eventually is grateful to him for “saving the party”, as if that would be so useful.

From disaster into greater catastrophy

D66 has been applying its great logical capacities, that they already showed on democracy, also on the issue of Wilders and immigration. Supposedly Pechtold attacked Wilders, but he actually made him bigger. D66 and Pechtold cannot see this fact and this logic, since Pechtold “saved D66” by that jump from 3 to 10 seats. Clearly the attack by Pechtold on Wilders was a great success, namely see the growth of D66 ! Thus they keep themselves deliberately blind about that jump of Wilders from 9 to 24 seats.

Well, it is Holland. Boycott this country till it develops a respect for science so that it lifts the censorship of science since 1990 by the directorate of the Dutch Central Planning Bureau (CPB).