Isaac Newton (1642-1727) invented the differentials, calling them evanescent quantities. Since then, the world has been wondering what these are. Just to be sure, Newton wrote his Principia (1687) by using the methods of Euclidean geometry, so that his results could be accepted in the standard of his day (context of reconstruction and presentation), and so that his results were not lost in a discussion about the new method of these differentials (context of discovery). However, this only increased the enigma. What can these quantities be, that are so efficient for science, and that actually disappear when mathematically interesting ?

Gottfried Leibniz (1646-1716) gave these infinitesimals their common labels dy and dx, and thus they became familiar as household names in academic circles, but this didn’t reduce their mystery.

Charles Dodgson (1832-1898) as Lewis Carroll had great fun with the Cheshire Cat, who disappears but leaves its grin.

Abraham Robinson (1918-1974) presented an interpretation called “non-standard analysis“. Many people think that he clinched it, but when I start reading then my intuition warns me that this is making things more difficult. (Perhaps I should read more though.)

In 2007, I developed an algebraic approach to the derivative. This was in the book “A Logic of Exceptions” (ALOE), later also included in “Elegance with Substance” (EWS) (2009, 2015), and a bit later there was a “proof of concept” in “Conquest of the Plane” (COTP) (2011). The pdfs are online, and a recent overview article is here. A recent supplement is the discussion on continuity.

In this new algebraic approach there wasn’t a role for differentials, yet. The notation dy / dx = f ‘[x] for y =  f [x] can be used to link up to the literature, but up to now there was no meaning attached to the symbolism. In my perception this was (a bit of) a pity since the notation with differentials can be useful on occasion, see the example below.

Last month, reading Joop van Dormolen (1970) on the didactics of derivatives and the differential calculus – in a book for teachers Wansink (1970) volume III – I was struck by his admonition (p213) that dy / dx really is a quotient of two differentials, and that a teacher should avoid identifying it as a single symbol and as the definition of the derivative. However, when he proceeded, I was disappointed, since his treatment didn’t give the clarity that I looked for. In fact, his treatment is quite in line with that of Murray Spiegel (1962), “Advanced calculus (Metric edition)”, Schaum’s outline series, see below. (But Van Dormolen very usefully discusses the didactic questions, that Spiegel doesn’t look into.)

Thus, I developed an interpretation of my own. In my impression this finally gives the clarity that people have been looking for starting with Newton. At least: I am satisfied, and you may check whether you are too.

I don’t want to repeat myself too much, and thus I assume that you read up on the algebraic approach to the derivative in case of questions. (A good place to start is the recent overview.)

Ray through an origin

Let us first consider a ray through the origin, with horizontal axis x and vertical axis y. The ray makes an angle α with the horizontal axis. The ray can be represented by a function as y =  f [x] = s x, with the slope s = tan[α]. Observe that there is no constant term (c = 0). 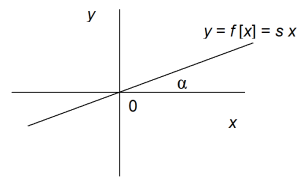 The quotient y / x is defined everywhere, with the outcome s, except at the point x = 0, where we get an expression 0 / 0. This is quite curious. We tend to regard y / x as the slope (there is no constant term), and at x = 0 the line has that slope too, but we seem unable to say so.

There are at least three responses:

(i) Standard mathematics then takes off, with limits and continuity.

(ii) A quick fix might be to try to define a separate function to find the slope of a ray, but we can wonder whether this is all nice and proper, since we can only state the value s at 0 when we have solved the value elsewhere. If we substitute y when it isn’t a ray, or example y = x², then we get a curious construction, and thus the definition isn’t quite complete since there ought to be a test on being a ray.

(iii) The algebraic approach uses the following definition of the dynamic quotient:

In a nutshell for dy / dx

In a nutshell, we get the following situation for dy / dx:

The latter “mistake” can be understood, since the algebraic approach uses notions of set theory, domain and range, and dynamics as in computer algebra, and thus we can forgive Newton for not getting there yet.

To link up with history, we might define that the “symbol dy / dx as a whole” is a shortcut for dy // dx. This causes additional yards to develop the notion of “symbol as a whole” however. My impression is that it is better to use dy // dx unless it is so accepted that it might become pedantic. (You must only explain that the Earth isn’t flat while people don’t know that yet.)

Let us look at Spiegel (1962) p58-59, and see how above discussion can bring clarity. The key points can all be discussed with reference to his figure 4-1.

Looking at this with a critical eye, we find:

Just to be sure, the algebraic approach uses this definition:

PM. Check COTP p224 for the discussion of (relative) error, with the same notation. This present discussion still replaces the statement on differentials in COTP p155, step number 10.

Our main point thus is that the mistake in history was to write dy / dx instead of dy // dx. There arises a subsequent point of didactics. When you have real variables x and z, then these have their own axes, and you don’t put them on the same axis just because they are both reals.

See Appendix A for a quote from Spiegel (1962), and check that it is convoluted at times.

Appendix B contains a quote from p236 from Adams & Essex (2013). We can see the same confusions as in Spiegel (1962). It really is a standard approach, and convoluted. 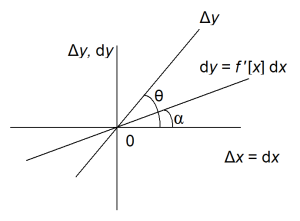 It remains an awkward setup. It may well be true that John from Los Angeles is called Harry in New York, but when John calls his mother back home and introduces himself as “Mom, this is Harry”, then she will be confused. Eventually she can get used to this kind of phonecalls, but it remains awkward didactics to introduce students to these new concepts in this manner. (Especially when John adds: “Mom, actually I don’t exist anymore because I have been set to zero.”)

Thus, in good didactics we should drop this Δx = dx.

Alternatively put: We might define dy = f ’[x] Δx = {Δf // Δx, then set Δx = 0} Δx. In the latter expression Δx occurs twice: both as a local and bound variable within { … } and as a global free variable outside of { … }. This is okay. In the past, mathematicians apparently thought that it might make things clearer to write dx for the free global variable: dy = f ’[x] dx. In a way this is okay too. But for didactics it doesn’t work. We should rather avoid an expression in which the same variable (name) is uses both locally bound and globally free.

Remarkably, we are using 99% of the same apparatus as the standard approach, but there are clear improvements:

This example assumes the total differential of the function f[x, y]:

PM. In the Dutch highschool programme, partial derivatives aren’t included, but when we can save time by a clear presentation, then they surely should be introduced.

The conclusion is that the algebraic approach to the derivative also settles the age-old question about the meaning of the differentials.

For texts in the past the interpretation of the differential is a mess. For the future, textbooks now have the option of above clarity.

Again, a discussion about didactics is an inspiration for better mathematics. Perhaps research mathematicians have abandoned this topic for ages, and it is only looked at by researchers on didactics.

The following quote is from Robert A. Adams & Christopher Essex (2013), “Calculus. A Complete Course”, Pearson, p236. 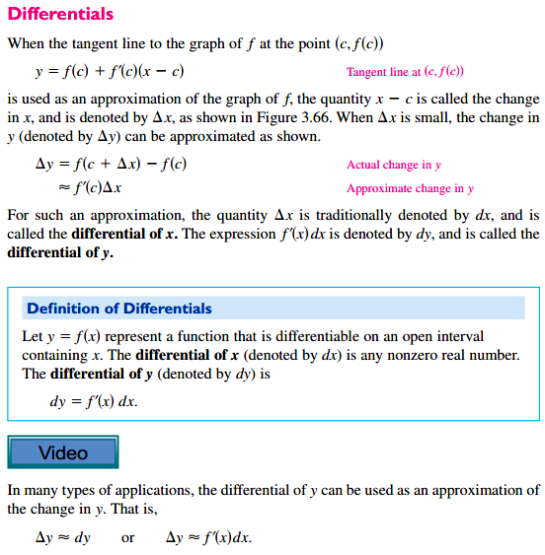