Anatomy of Holland, Role of mathematics

I am sorry to report a breach of scientific integrity in the period 1981-2014 by Johan van Benthem, professor of logic at the universities of Groningen and Amsterdam, who is retiring these days.

I wrote the 1981 draft of “A Logic of Exceptions” (ALOE) when I was a student of econometrics in Groningen. Johan van Benthem was my professor of logic. He presented Gödel’s incompleteness theorems but did not show that these are essentially nonsense. Those derive from a form of the liar paradox. The Liar is “This sentence is false” and the Gödeliar is “This theorem is unprovable”. It merely adds a layer of complexity. The inclusion of some conditions for reasonableness – such as that what is proven is also true – causes the issue to collapse to the Liar paradox. Thus those theorems are not useful for science, but a mathematical exercise in irrelevance. Van Benthem however suggested that Gödel’s incompleteness theorems would be important for science.

Van Benthem did not react kindly to the draft of ALOE, gave up on it, but helped to find Albert Visser in Utrecht, who subsequently maltreated ALOE too. The conversation with Visser was by telephone and not an example of proper communication. In one perspective it is kind, when a professor gives up on a draft work by a student, that he helps to find a third reader. In retrospect Van Benthem should not have given up on that work but should have looked for someone to help himself e.g. on science.

When “logicians” form a sect who think that Gödel’s incompleteness theorems are more important than reasonableness, then science has a problem – and teaching of science too.

PM. In those days, Van Benthem gave priority to correcting errors for a new edition of “Gödel, Escher, Bach” by Douglas Hofstadter, which will have helped his career, but which created more confusion for the general public, as if those incompleteness theorems would amount to something “deep”. Buyers of GEB should ask Hofstadter and Van Benthem their money back.

In 2007 I reread ALOE and edited and published it. I contacted Van Benthem and Visser. (The email in Dutch is here.) Van Benthem did not react. He neither reacted when I informed him about the favourable 2008 review by Richard Gill (mathematical statistics Leiden, KNAW) in “Nieuw Archief voor Wiskunde”, the journal of the Royal Dutch Society for Mathematics. Albert Visser responded in an email exchange, which appeared another exercise in non-communication.

(3) Statics vs dynamics in logic

When contacting Van Benthem and Visser in 2007, I noted that Van Benthem had got a Spinoza prize (2 or 4 million guilders in 1996) for dynamics in logic, with this Dutch book “logica in actie” with the same title. However, in 1981 I had used the distinction in economics between statics and dynamics in analysis to transfer this also to logic, calling “implication” statics and “inference” dynamics. In itself it does not change anything about implication vs inference, since that distinction was well known. But it may help to clarify the distinction to who comes to the issue afresh. This was an aspect that Van Benthem appreciated in 1981. So I wondered whether he could tell whether our conversation on it had been relevant for his apparently later research on such dynamic logic. It may be, or it may not be, as a look e.g. on wikipedia shows that there have been other writers working on dynamic and temporal logic in 1974-1977. It would be proper to give a reply to this question.

PM. ALOE 2007 contains a few pages on the paradoxes from division by zero, and proposes to solve these with the “dynamic quotient”. This was not in the 1981 draft and was new in 2007. But the notion of dynamics in ALOE fits the approach there too. See also “Elegance with Substance” (2009) and “Conquest of the Plane” (2011) and this September 2014 paper for more context and development.

As a student in 1981 I had mixed feelings about the situation. I graduated in econometrics in 1982 anyhow, ALOE was no priority and was shelved.

The box turned up again when I went to Curaçao in 2005-2006. After writing my book on the Caribbean economy (PENAFC 2006) I decided that I better publish ALOE since it was a good opportunity to do so and there would not be another one when I would start doing new things.

Now, looking back at the affair with my professional experience as econometrician and college teacher in mathematics, statistics, logistics and operations management, I find the reactions by the “logicians” scientifically improper.

I might have filed an official complaint but I preferred giving ALOE a chance to be discovered and read by others without that context.

Now that Van Benthem retires in September 2014 with superlatives as if he would be such a good “logician”, I feel however that this protest must be mentioned. There is, in Dutch, (a) my letter to the board of the University of Amsterdam, (b) my letter to the ombudsman of the Volkskrant newspaper w.r.t. a biased interview with Van Benthem by journalist Maarten Keulemans.

In that interview, Van Benthem suggests that he is open to dialogue:

“Personally I have another idea about science. I find science a form of organised discussion, and the power of science lies in the quality of that discussion. The fact that we put differences of opinion up for discussion, allows us to progress.” (Volkskrant September 27 2014, Sir Edmund, p41)

This is an outright lie, given that Van Benthem did not respond to my 2007 email and completed ALOE.

Of course, journalist Maarten Keulemans has not reacted to my protest last weekend on his interview. Instead, he rather retweets the admiration of readers who he has misinformed. 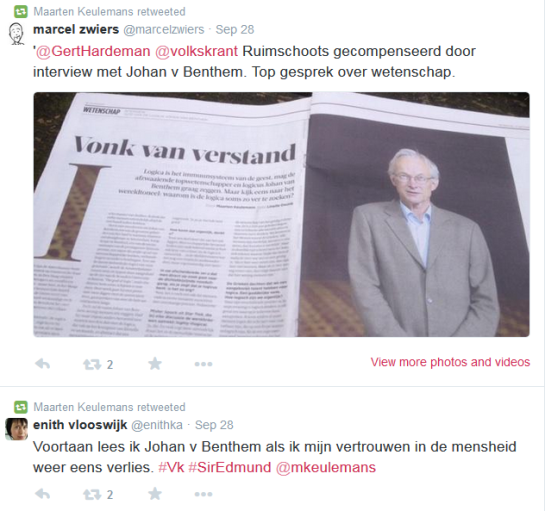 This issue in logic and the improper response by “logicians” has had a remarkable influence on further developments, see this earlier weblog entry or the longer paper:

After 45 years of unemployment: If Holland had been just a bit nicer and more competent, June 2014.

(6) Returning to the Liar paradox

The above is essentially a report on the breach in scientific integrity by professor Johan van Benthem. But the reader will also be interested to hear how the story continues with the Liar paradox. Well, the solution method by Kurt Gödel to use provability instead of truth thus collapses (since we want truthful models, except for mathematicians who don’t care). The other solution of Russell and Tarski is to use (meta-) levels, but this collapses because of the flexibility of language, and in particular the self-reference. This is bad news for the wonderful book Logicomix. ALOE also solves Russell’s set paradox, of the hero of Logicomix. Thus we find the third solution method, which is a three-valued logic with the notions true, false, nonsense. It appears that there is a consistent manner to deal with the versions of the Liar paradox for three-valued logic. The issue has finally been solved after bugging logic for 2300 years.