The boycott of Holland is difficult and counter-intuitive because there are so many attractive features of Holland that you want to enjoy and don’t want to boycott at all. Consider Anouk from The Hague, not far from my Scheveningen residence.

Don’t underestimate this Dutch mistress of rock ‘n’ roll. She is a mother of four, creator of twelve albums, receiver of many awards, who still experiments with men, soul, funk and hip hop.

Anouk’s latest performance is at the Eurovision Song Contest 2013. She made it into the finals on Saturday May 18 and her success sends waves of euphoria through Holland. One must be a blind and deaf European not to have heard about this annual event. The Song Festival has done more for European integration than the European Union and should have been the actual receiver of the Nobel Prize for Peace. 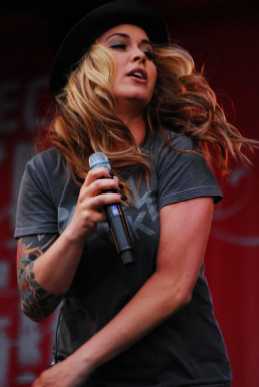 According to the videoclip her song Birds is about a ballerina who is replaced by a competitor and then climbs to a balustrade to jump to her death on the dance floor. A flock of birds outside makes the ballerina smile and she jumps with spread arms as if flying along. A lyric is: “No air, no cry, that’s why birds don’t fly.” I am afraid that I don’t get it. A ballerina may look like a bird but shouldn’t think that she really is a bird ? But birds do fly. Anouk herself plays the choreographer who replaces that ballerina and who triggers the sad events. She maintains a stern face and isn’t singing at all, so we don’t get a clue here either. It seems only wise that she didn’t use the ballerinas and birds in the Eurovision performance but only presented herself in her plain rocker outfit, outclassing all the glitter and glamour of her competitors with her simple black sweater and jeans.

Curiously, the Anouk YouTube playlist provides us with two other videoclips that show a flock of birds, the songs Kill and The Good Life. I like Kill better, since here we see Anouk making love to an admirer, and that is a story that an admirer can appreciate. Unfortunately, there is a jealous wife who threatens to kill them … I shouldn’t tell you how this clip ends but the logic is easier to follow and it is a warning to all admirers to keep themselves in check and maintain proper distance to this femme fatale rockstar. The final videoclip Pretending As Always doesn’t show us Anouk herself. It neither has birds, but men dressed as rabbits and behaving like rabbits in the Amsterdam red light district. Apparently there is some reverse psychology with the same message that some men cannot be trusted. Anouk’s tough rock ‘n’ roll image hides a womans heart that longs for a man whom she can trust.

I have to be stern and, well, Kill the Dutch euphoria on her chance to win the Song Contest. I have to advise you to boycott Anouk too till the censorship in Holland is lifted. If I wouldn’t advise this, Anouk couldn’t trust my word anymore, and none of us would want that.